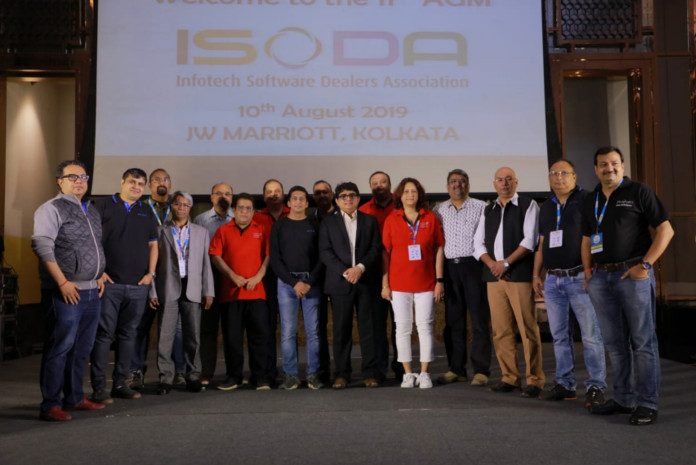 The Infotech Software Dealers Association (ISODA) organised its AGM recently in Kolkata. A unique innovation that the ISODA team came up with this time was to precede the AGM with Biz Summit, where newer vendors got to network with ISODA members for a complete day and ISODA members got an opportunity to pitch their solutions to their peers. The theme of the Biz Summit was 10X, signifying efforts of the community as a whole to achieve 10
times the business from the current scenario.

At the AGM, after the financials and the last years’ minutes were passed, the elections took place for the positions of Vice Chairman, Vice President and Secretary.

In the elections, Rajeev Mamidanna, erstwhile President of ISODA and Co-founder & CEO of
technosprout systems won the Vice Chairman’s position. Dnyanesh Kulkarni, founder ISODA,
erstwhile Secretary of ISODA and Director – Deltakraft won the Vice President’s position. The
position for Secretary was retained by Vimesh Avlani, Director – Graftronics. Amarnath Shetty, Managing Director LDS Infotech, who was the Vice Chairman in the last term, got promoted as Chairman of ISODA. Manasi Saha, Founder & Owner of Macaws Infotech, who was the Vice President in the last term, got promoted as President of ISODA.

The top priorities for ISODA Management Committee this year will be:
• Implement ISODA ASAP (As Skilled As Possible)
• Take collaboration within members to next level
• Upscale CSR activities
• Improve communication with vendors and distributors
• ISODA marketplace to showcase products and services
• A unique identifier for all ISODA members
• Ensuring addition of new members and retention of old members
• Soft skill development for ISODA members and their employees to enhance knowledge
• Focus to be increased in non-metro cities
• Member Grievances cell to be set up to address and solve business or transaction related
issues
• Inter country collaboration with our neighbouring countries and their trade associations
• Focus on P2P (Partner relations)
• Digital Marketing to be taken to next level by Increasing visibility of ISODA socially

Another important announcement was that of the TechSummit 10 Chairman. Jiten Mehta of
Magnamious was selected as chairman of TS 10. All present members appreciated the team of TS 9.

Some of the subject matter experts from ISODA who shared their business experiences were Sudhir Kothari (His idea of 10x growth), Sandeep Sengupta (Cyber Security Hygiene and Ethical Hacking) and Hemant Chabria(Hot Pitch). At the Hot Pitch, we had 8 ISODA MEMBERS from different parts of India, pitching about their products, services or training. The speciality speaker for the occasion was Soustav Chakraborty from Capital Quotient Bangalore and he spoke on “How to become financially 10x in a 5-7 year horizon”.