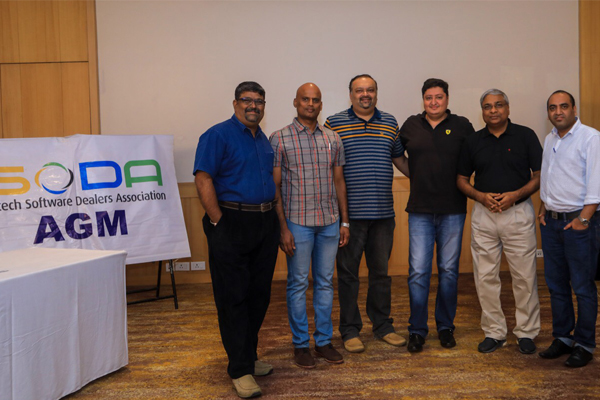 The Infotech Software Dealers Association (ISODA) recently concluded its Annual General meeting at a private resort in Mumbai. This year, the Secretary and Treasurer continued in their term. The Vice Chairman and Vice President were elected unopposed. This was formally announced to all members present at the gathering by the returning officer, Prashant Jain who presided the session.

In addition, Atul Modi – Director, Modi Infosol, was announced as the TechSummit 8 Chairperson and will be presenting to the community shortly on when and where will the marquee event take place. Since NK Mehta became Vice Chairperson after vacating the Regional Secretary – South role, D Kabilan, Founder Director – Cetas Information Technology, was announced to take over from Mehta as the RS – South.

The achievements of the previous team were presented. Some key achievements included a very successful TechSummit 7 at Vietnam, huge acceptance to ISODA Mouthpiece called Interconnect, addition of members across the country including newer states and cities and overall governance of working as a team.

After the elections and swearing in of the new MC, a very interesting session by our Gold Sponsors followed. Gold Sponsor – Udyog Software – presented their solution to make GST automation a reality. The presentation and the demonstration of the software left everyone with a lot of interest. Dhruv Dua, ISODA’s tax consultant, later conducted a GST unplugged session that was equally well-received. Day 2 continued to provide the members with more technology insights with sessions from sponsors XcellHost on how to adopt Cloud Quickly and Enjay CRM on having CRM on the mobile for utility and ease. Yogesh Gupta – executive Editor of IDG presented to everyone on Digital – Shifting Goalposts, a session about how digital transformation by enterprises is changing the roadmap of tech channel companies.

The AGM concluded with a session by Leadership coach for independent business owners, sr. executives and women leaders – Kavita Nath. She kept the audience very interested with her session “I am ready to take-off”.

The top priorities for ISODA Management Committee this year will be: