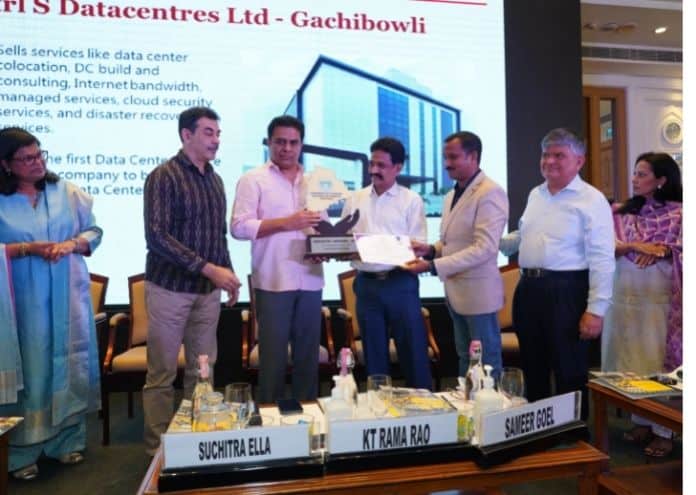 CtrlS bagged the best sustainability award in recognition of its innovations and initiatives in the sustainability efforts. The award were presented by Shri KT Rama Rao, Hon’ble Minister of Industry & Commerce, IT, E&C and Municipal Administration & Urban Development, Government of Telangana.

The award is part of the most sought after ‘Industry Awards’, that recognize and reward exceptional achievements made by Telangana based businesses, covering both large and small organizations. Applicants were spread across six categories – Best Export performance, Best Innovation, Best Sustainability practices, Best Startup, Best CSR Practices, Special Contribution (IT Services).

Sridhar Pinnapureddy, Founder and CEO, CtrlS Datacenter said, “We thank the State Government of Telangana for bestowing this honor upon us. This award recognizes the innovation, and tireless efforts by our team towards in creating a beautiful planet through elimination of carbon emissions, water recycling, achieving higher levels of energy efficiency, deployment of renewal energy such as solar, maximized exclusion of plastic from our ecosystem, e-waste re-cycling and management, ninety percent elimination of paper usage thereby saving trees and restoring ecological balance.”

The sustainability efforts by CtrlS have eliminated 200,000 metric tons of carbon dioxide, 10 million tons of water recycle, 59,795 Tons of waste recycled, displaced carbon equivalent to 43,478 Cars driven in a year. The company has built an air filtration plant at its Noida data center to filter the air pollutants such as Sulphur which cause immense damage to the metal based equipment collocated in its data center. It operates the largest number of green hyperscale datacenters, certified as LEED Platinum v4 O+M by USGBC.

The awards were facilitated by the Department of Industries & Commerce under the guidance of Mr. Jayesh Ranjan

“It is heartening to see the industrial growth in Telangana through companies which are not only innovative but also have sustainability built into their fabric. The future belongs to such companies which not only create wealth for themselves but are also socially responsible.” said, Jayesh Ranjan, IAS, Principal Secretary, Government of Telangana.

“The variety of scale, industries and types of innovation was very impressive. We got to see so many innovations which we would otherwise not have known about, thanks to this initiative. Keep it up” said Ajit Rangnekar, Director General at Research and Innovation Circle of Hyderabad Partner, SVP India and Former Dean of the Indian School of Business (ISB).

CtrlS certified as a Great Place to Work