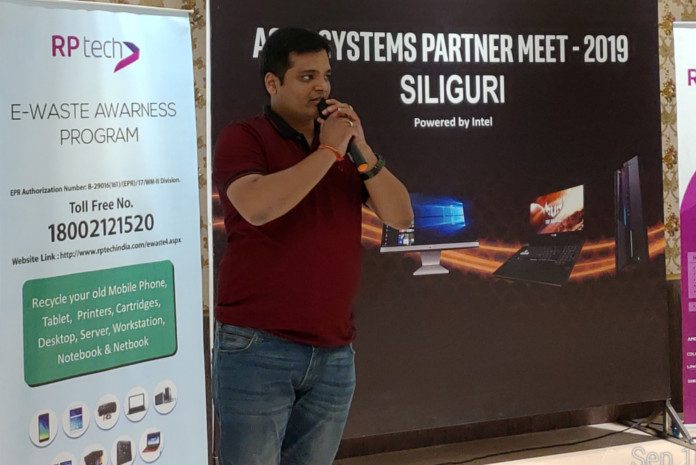 Committed to its Go Green initiative, RP tech India, Country’s only value-added distributor sensitized over 700 channel partners on e-waste management. As part of its flagship, Partner Connect program, the Company reached out to tier three partners and educated them on its e-waste management efforts.

RP tech India recently concluded a multi-city roadshow in association with Asus and Intel in 15 tier-three cities. The objective of the event series was to connect with partners and educate them on the latest Asus offerings in Notebook and Desktops. Leveraging this unique platform, RP tech India educated the audience on the growing concern of e-waste pollution.

Electronic waste is a serious public health and environmental issue in India. According to estimates, India is the fifth largest electronic waste producer in the world with approximately 2 million tons of e-waste are generated annually. Industry body ASSOCHAM states that India will generate about 5.2 million tones e-waste by 2020.

While the country is rapidly becoming the hub of e-waste, more than 95 per cent of e-waste management is handled by the unorganized sector. Lack of training of handling the e-waste and unscientific disposal pose a serious threat to the environment as well as the workers. Taking note of this critical issue, RP tech India has commenced 50 collection points pan India to collect end of life (EOL) electronics. The company has partnered with Reteck Envirotech, one of the largest authorized e-waste recyclers.

Appreciating the initiative, Neeraj Malik, owner of Rohtak based Excellent Computer said, “E-waste pollution is currently the serious threat to the environment. It requires awareness and collective efforts to ensure a safe environment for our future generations. I fully support RP tech India for its efforts to bring awareness in the channel community”.

Another partner, Ajay Sahani, owner of Patna based Global Systems said, “As a seller of computer electronics, it is our obligation that we ensure we create a system for scientific recycling of e-waste and save our environment from contamination. It is not the responsibility of a one person, but collective efforts from all. I appreciate RP tech India for taking up this cause and I will also contribute to making the difference.”

Aim to reach out to 9000+ partners and educate them on e-waste management, RP tech India is running several orientation and awareness programs pan India. “As a leading technology distribution Company in India, it is our mandate to stop the degradation of the environment due to e-waste. The aim of starting these collection points in each of the RP tech India branch is to ensure that we are accessible to end-users. We will leverage the Partner Connect platform in collaboration to our vendor partners to reach out to a maximum number of partners across India and spread the awareness,” said Rajesh Goenka, Director, Sales and Marketing, RP tech India.

ATEN extends its reach in India; partners with RP tech