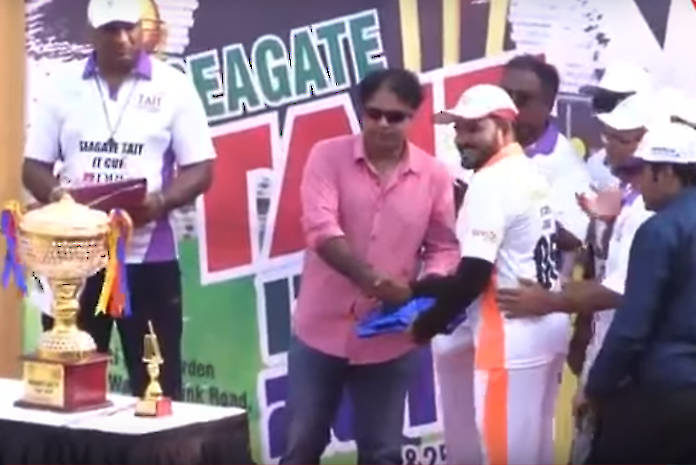 Trade Association of Information Technology (TAIT) recently organized a cricket tournament that saw OEMs and IT retailers (channel) come together. The event was held at the Bhakti Park Garden in Wadala, Mumbai. The LG-Orno Gladiators, a team owned by LG in association with its distributor Orno Computers, displayed an all-rounder team performance as they played with 11 other teams for two days to win the grand final and claim the Seagate-TAIT IT Cup 2018 title. The TAIT IT Cricket cup has been an annual event since 2014 and this year assumed a larger, reformed format, with active participation by the members. This year has seen the event expand to a larger format, spreading over two days and involving the OEMs for the first time.

Spearheaded by the new director on board, Sunil Thariani, with the event committee members; directors namely Samir Parekh, Samir Mehta, Magan Gangani, Gopal Pansari, this initiative was well supported by the board. The event followed the popular IPL format of cricket. The 12 participating teams were formed with key OEMs as owners and the distributors as co-owners, making them close partners and team members. The teams were divided in four groups and played 12 league matches, four quarter finals and two semi-finals. Also unique to this year’s TAIT IT Cup was broadcasting of the tournament to reach over 37 countries, garnering more than 16,000 views over two days.

Jwala Singh, a formal national level cricketer, current director of the Mumbai Cricket Club and coach of Prithvi Shaw – the illustrated Indian cricket captain of the under 19 team – was the chief guest at the tournament.

K R Chaube, President, TAIT, said, “TAIT has been organising the TAIT IT Cup for the past 15 years with earlier 11 years with the season ball and open-ended format and since last four years in reformed format. Each time we try to improvise. This year we have introduced an innovative format, involving all the partners in the larger IT ecosystem, including OEMs (vendors), distributors, channels, TAIT members etc. Our objective is to bring these partners together in an informal and engaging platform where, through cricket, they can work towards winning as a team effort. The same bonding and team spirit can then be applied off the field and they can work together to mutually benefit and grow the business while creating a close-knit IT community.”

Title sponsor for the tournament, Sameer Bhatia, Country Manager, India and SAARC Region, Seagate, added, “I would like to thank TAIT for organising and meticulously planning this mega event and bringing the entire IT community together. It is a wonderful platform for OEMs, distributors and partners to bond and unwind in a playfully competitive environment. We, as IT professionals are so busy in our daily schedules and, although a form of networking, events like these are effective stress busters, allowing us to gain a small part of the lost work-life balance. In the past couple of years, Seagate has been actively associated with social networking and events such as these and we plan to continue encouraging such initiatives in the future.”

Highlighting the nuances of the event, Sunil Thariani, Director, TAIT, explained, “We had 12 teams and 19 matches which were extremely exciting ang gripping. All the teams have played hard and played fair. We are thankful especially to Mumbailive.com who has helped us drastically to have the reach of this tournament across the world, where friends and families all over the globe have been following the matches and calls have been coming in. In the future, we hope to take this to a larger scale, make it a more professionally handled event. In terms of learning, we will shift to night matches to ensure the businesses of members in not affected and more member families can join in to witness. I would also like to thank all our TAIT Directors and sponsors and OEM’s for their support.”

Pawan Jaiswal, Sales Manager – Mumbai, Acer India said, “Acer has been actively participating in various TAIT events, including the cricket tournaments. This year is a much larger format and we have our own team for the first time. We are playing with three of our distributors and quite a few members of Acer Mumbai staff. With 12 teams I think there are close to 200 members of the IT ecosystem gathered here on this ground, making this a great platform to interact and bond in an informal setting with the community. This will definitely create an ease of doing business. I look forward to be a part of this event for future years.”

Anoop Jarial, Vice-President, Product Marketing, D-Link India, commented, “The event has been much beyond what we had expected. It was a beautiful concept that has been executed equally well. TAIT has done a wonderful job of getting great players, great teams and get so many members from different parts of the IT business segment is an achievement. The social networking opportunity is a great way to bond with people who we interact with every day in a professional way and its great to connect with them in a playful format.”

The award ceremony concluded the proceedings of the two-day tournament.

We believe in creating our own IP: K R Chaube, Director,...