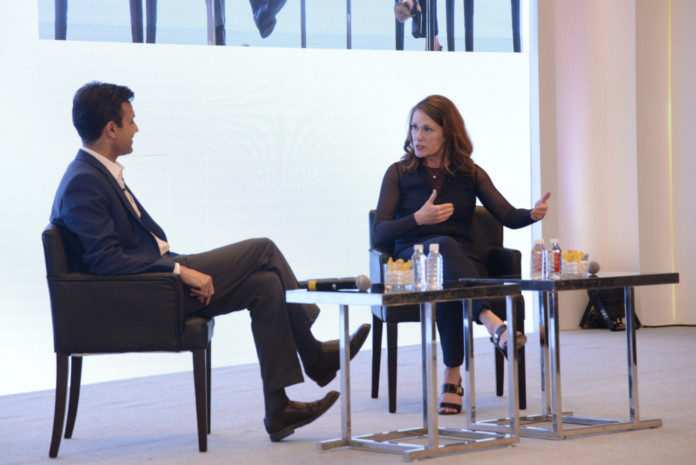 Technology giant Microsoft, identified the significance of blockchain in the enterprise and social sectors very early, and has been strengthening its focus on the technology globally. On March 26 in Mumbai, at a blockchain conference titled, ‘Creating tomorrow today with blockchain’, in association with Express Computer, Peggy Johnson, Executive Vice President, Business Development, Microsoft, said, “Blockchain gained visibility in 2008 due to Bitcoin. I was intrigued by the technology that powered it. Today, it has become a global phenomenon with multiple use cases across multiple industry sectors.”

“In recent interactions with our customer and partners, we have observed that many of them have put blockchain teams in place. From an enterprise perspective, blockchain is helping businesses streamline a number of processes. As part of Microsoft’s global efforts, last year the company built an opensource solution set for high speed transactions for enterprise customers, which will continue to expand. Blockchain can also help the social sector in numerous areas, one of which is identification. Billions of people around the world have no recorded identification – largely women and children – keeping them out of social benefits and the economy. This is a tricky area, but blockchain can be a great tool in this space,” stated Johnson.

In terms of security aspects of blockchain, Microsoft has been engaging with enterprises, regulators and policy makers in an endeavor to deepen the cybersecurity policy dialogue. It recently engaged with the Chamber of Digital Commerce, the world’s leading trade association representing the digital asset and blockchain industry, to publish a whitepaper on Advancing Blockchain Cybersecurity: Technical and Policy Considerations for the Financial Services Industry. The whitepaper offers several policy recommendations applicable to both blockchain users and their regulators. By providing recommendations for industry as well as government, Microsoft reinforces the notion that cybersecurity is a shared responsibility, that technology users have a role to play alongside government bodies, particularly with regard to cyber risk management.

Additionally, Microsoft also engaged with GS1 in the supply chain space, wherein blockchain is said to play a critical role. “For instance, we did a project with a US-based shipping line recently. The shipping industry spends around US$ 30 billion on insurance, wherein settlement can consume weeks and months. We worked with Ernst & Young and came up with a solution to streamline this,” she said.

The conference also featured a panel discussion on blockchain’s applications, wherein key IT decision makers from the BFSI and manufacturing industries elaborated on the use cases of blockchain and the ongoing deployment of blockchain at their respective organizations. Pratap Gharge, Executive President and CIO, Bajaj Electricals, informed, “We started our implementation of blockchain for making payments to our suppliers; the supply space is small scale in nature and capital is important for them, thereby creating a need for faster payments. Our first phase of blockchain implementation is already live and we are planning to introduce bill-to-bill transaction in the second phase.”

According to Sudin Baraokar, Advisor – Innovation, State Bank of India, “This year there has been a significant shift to business-driven and outcome-based use cases. We are working on getting the entire bank guarantee on blockchain, alongside we are also working with Microsoft and Intel on bad loan exchange – there is around Rs 10 lakh crore worth of bad loans in India,” he said, adding that last year SBI evaluated 17 fabrics and developed over 10 pilots to check these solutions. SBI has over 450 million customers and 55 million accounts.

Admitting that there has been a lot of hype around blockchain solutions, the panel reiterated the need to identify relevant use cases for its adoption. Sudip Banerjee, Group CTO, Reliance Capital said there are multiple use cases in the insurance space; for example, blockchain can significantly simplify the claim process. Another use case is that of auto claims, wherein a lot of things can be done, thereby cutting down costs and eliminating possibilities of frauds.

Sharing his perspective, Rohas Nagpal, CEO and Chief Architect of a blockchain startup Primechain, said, “What attracted me towards blockchain was its immutable database. We need to understand that there is too much of hype around the technology; blockchain can’t do everything, but the areas it can cater to capture 90 per cent of everything. We have to identify the relevant use cases such as KYC and exchange for stressed assets. Blockchain is a fairly young technology; furthermore the negativity around Bitcoin may also affect its adoption.”

BankChain, a platform for banks for implementing blockchain software initiated by SBI last year, currently has 33 members, primarily from India and the Middle East, but we are looking to expand it, added Nagpal.

Addressing the challenges, Akhil Handa, Head, Fintech and New Business Initiatives, and Advisor to MD and CEO, Bank of Baroda commented that there is a lack of production-ready use cases. He elaborated, “One of the major challenges is adoption. Many institutions still don’t have their core systems in place. The challenge is to get every officer to start putting every record on blockchain.”

At another session at the conference, Mohammed Nasiruddin, senior program manager, Microsoft India, highlighted how to start the transition to blockchain. Echoing the panelists, Nasiruddin said that blockchain can help to solve certain problems, but it is not a magical solution. He said, “The factors determining blockchain’s appropriateness include scenarios wherein businesses cross boundaries, multiple parties manipulate data, intermediaries control the single source of truth and process involves manual verification steps.”

The common thread amongst all the participants was that there are immense opportunities for further engagement with the blockchain community and regulators across sectors to improve understanding of blockchain security, identify intersections between regulatory concerns and blockchain’s security capabilities, and optimize cybersecurity policies to support continued growth and innovation in this exciting area.

TCS to drive blockchain adoption with solutions built on Microsoft and...

Microsoft introduces the Power Platform Return to the Workplace solution in...