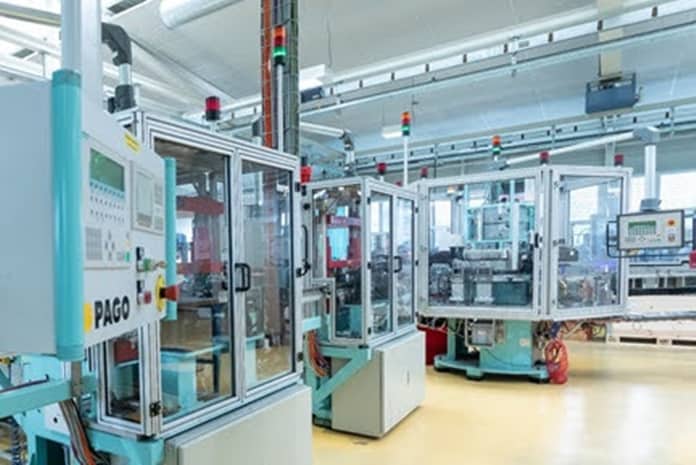 R&M, the key to the Gigabit age of office communication is celebrating its twentieth anniversary: the Cat. 6 connection for data networks. It revolutionized data traffic, brought broadband Internet to the workplace and pointed the way toward digitalization. On August 1, the Swiss National Holiday, this milestone was celebrated at R&M, developer and provider of cabling systems for high-quality network infrastructures, based in Wetzikon, Switzerland, for the twentieth time. R&M is one of the three largest RJ45 manufacturers in Europe and has produced over 100 million Cat. 6 modules in the past 20 years.
Cat. 6 connections with the universal, space-saving RJ45 plug-in format were responsible for a quantum leap in information technology at the millennium. Cat. 6 technology made it possible to increase the speed of data transmission and raise bandwidth to 250 MHz. Since that time, quantities of data have been able to be transported in offices and buildings which previously would not have been conceivable. Even today, Cat. 6 is still the most installed network connection worldwide. A Cat. 6 adapter is situated in every second outlet of data and communication networks. In addition, Cat. 6 of the follow-up technology Cat. 6A (Advanced), which was introduced ten years later, has paved the way for the leap to 10 Gbit/s Ethernet.
R&M was actively involved in Cat. 6 standardization in the international expert committees. Even before the transmission parameters were finally adopted, R&M went on the offensive in 1999. The company developed its own Cat. 6 module and set up a production facility in Bubikon, near its headquarters. R&M was the first manufacturer to produce the Cat. 6 modules fully automatically and in zero-defect quality. The first thousand pieces were delivered to a customer in Winterthur (Switzerland) on August 2, 2000. Today, more than 100 million R&M Cat. 6 modules installed worldwide ensure fast data transmission.
“Our contribution to the start of the Cat. 6 age is a genuine Swiss success story,” says Matthias Gerber, Market Manager LAN Cabling at R&M. He headed the Cat. 6 project from the outset. Mr Gerber continues:”R&M is proof that competitive production in Switzerland is possible. It has been proven that long-term investment in Switzerland generates high value creation. We concentrate on premium markets which expect transmission performance and reserves to exceed standard parameters.”
In 2000, R&M exceeded the demanding Cat. 6 component requirements with its first module on the market. The industry was soon referring to the R&M product as a ‘blue wonder module’ because of its quality. And even today, it is still seen as the most reliable network connection in the world. R&M is the only manufacturer not to use printed circuit boards for compensation at Cat. 6 level. This means the data signals flow transition-free directly from the cable connection to the plug. With the Cat. 6 module, R&M established itself as the technically leading manufacturer and world brand for RJ45 adapters.
In technical terms, it was a question of introducing the ISO/IEC 11801 standard (2nd edition) twenty years ago. The standard defined data transmission using the Ethernet/Internet protocol, with 250 MHz bandwidth and a speed of 1 Gigabit per second (1 Gbit/s) over 100 meters of twisted-pair copper cabling. Main application areas are structured cabling for data networks in offices, data centers, factories and functional buildings of all kinds.