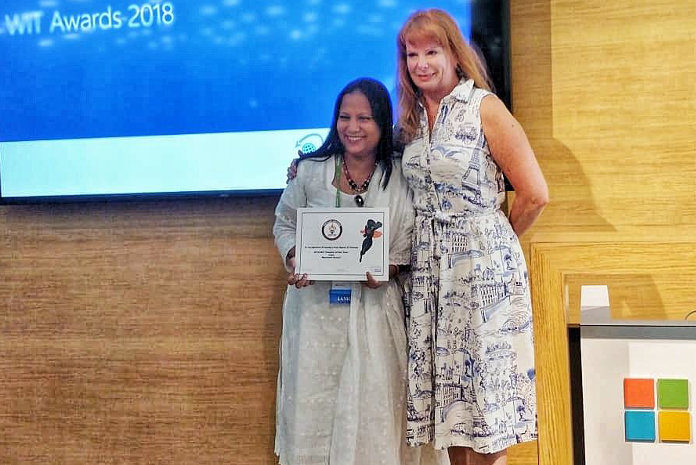 WIT is a joint initiative between the International Association of Microsoft Channel Partners (IAMCP) and WPG, the Microsoft Worldwide Group. The Women in Technology community is a networking group of like-minded women professionals in the Microsoft Technology eco-system. Both Microsoft employees and Microsoft partners are welcomed and encouraged to participate.

The WIT award recognises the Chapter President and her team who have built and fostered the WIT community through various initiatives like giving back to the society through fundraising, running leadership and knowledge development WIT events or programmes.

Nazmeen Ansari, President, WIT – India Chapter and CEO, Matrix3D Infocom, said, “It’s an honour to be recognised as the Best Chapter for Women in Technology across 70 global chapters. The award gives us the confidence to scale our initiatives and reach out to more women in India. For the past few years, we have been working with woman across India on various initiative by partnering with local NGOs. They have mentored the women who took a break from work because of family or any other reason which is very common in India to bring them back to the work.”

WIT India has collaborated with local NGOs to work with young school girls to develop leadership skills and encourage them to make their career in technology.

Ansari has a vision for IAMCP WIT India in five key areas that include enhancing women’s professional growth by mentoring them, providing an opportunity for women entrepreneurs to leverage their business by using technology, bringing back women who took a break from work, providing computer education in rural area and developing leadership skills and encouraging young school girls to make career in technology.

Ansari, the Chair for WIT India, was also nominated for the Leadership Award. She is the only person to be nominated in two categories. This award recognises leaders who led WIT movements and progress in challenging environments and persevered with the mission of diversity, inclusion and equality in mind.

News CRN Team - July 2, 2020
Snowflake, the cloud data platform, has announced that Tat Wee has joined the company as Head of Sales Engineering, South Asia. He will be...

Our framework is strong enough to handle any operational issue virtually:...